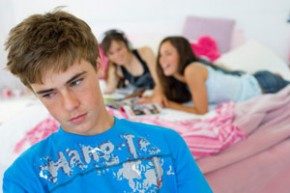 Depression can affect people at any age. While depression in children is rare, it certainly does exist and in recent times has become more prevalent. The age group that should be taken seriously however is teenagers. Depression in teenagers is rife and should be handled delicately but in due time. if you are wondering what causes depression in teenagers, it is simply the stress that life has on them at that point in life. Teenagers are adolescents who are undergoing an array of changes in their body as well as their lifestyle. The dramatic change can be overwhelming in some individuals making them depressed. Teenage suicide is a common occurrence and depression in teenagers is one of the leading causes for this.

The difference lies in the intensity and frequency of the signs. If episodes of aggression and loss of self-control occur so often that it is affecting their day to day lives, it would be highly recommended to have a diagnosis for depression taken. Another thing to remember is that teenage suicide has become prevalent over the years and this disorder is one of the main causes. This usually occurs in teens who have not been treated. For this reason, the most important goal of when it comes to depression in teenagers is seeking adequate treatment in time. As long as treatment is administered in due time, the chances of the person developing suicidal tendencies and following through with them is greatly reduced.

While antidepressants are usually the remedy of choice, it is highly recommended to stick to other alternative treatments which produce less side effects and long term harmful effects. If you find a teenager who has been rather difficult to control and quite emotional whether it is aggressive or passive, it should be approached with consideration and concern or it just might be too late when you realize the person is suffering from the condition.

Being sad for a few days, we often think we have depression symptoms, but it is not always true. First of...
Signs and Symptoms Depression

Before talking about childhood depression symptoms we would like to draw your attention to difference between...
Signs and Symptoms Depression

What are Symptoms of Chronic Depression?

Causes of Chronic Depression Depression is our response to traumatic events; it can last from 6 to 9 months...
Signs and Symptoms Depression

Depression is a disorder that affects a person in various degrees. It could be intermittent periods of having...