Signs of depression in men

Signs of depression in men are practically the same as those ones in women. They are anxiety, emptiness, chronic fatigue, persistent sadness, insomnia, oversleeping, early-morning waking, Loss of interest in activities and hobbies, pessimism, Feelings of guilt, hopelessness and worthlessness, weight and appetite loss, weight gain and overeating, difficulty making decisions and concentrating, and at last thoughts of suicide.

But all these signs are expressed differently. And though some people consider that clinical depression affects only women, it is wrong. The question at issue is the women seek for medical advice more often than men. Men, suffering from this medical condition, usually go into shell and commit suicide more often than women.

As for difference between signs of depression in men and women, such emotional symptoms as sadness and crying are hardly exhibited by men. As it was told above, they prefer not to talk about feelings and go into shell. They hide symptoms of depression from relatives, friends and colleagues. Men tend to ignore their signs of depression, because they think this medical condition cannot affect them.

At the same time, physical signs of depression in men are more likely noticed than emotional signs. They are exhaustion, lack of appetite, digestive disorders, insomnia or oversleeping, headaches and chronic muscle tension. 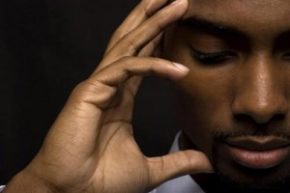 Complications of depression in men

Being ignored, above mentioned signs of depression in men can result in complications. Most men do not ask for help when get depression. They consider this disorder to be a weakness which does not need treatment. They say they are fine and ignore signs of depression. This is their serious mistake which can cost them much. This mental disorder will not go away without proper treatment. When signs of depression in men are noticed, it is necessary to seek treatment; otherwise men put themselves at risk of complications. These complications include sexual problems. In the worst case scenario delay can result in suicide. Men tend to use guns when committing suicide just as women use sleeping pills. Younger men are at lower risk for committing suicide than older ones, because they are not so disappointed in life. Older men feel unhappiness because of health problems, ageing, retirement and death of family members.

Having noticed above mentioned signs of depression in men, do not ignore them, seek support from the family and see your family doctor. Depression is treatable with help of antidepressants and therapy.

Depression is one of the world’s leading causes of suicide. Due to the nature of the illness it can be...
Types of Depression

Considering the numbers, depression may not be considered serious but don’t be fooled. Despite the fact...
Types of Depression

How to kill postnatal depression?

Baby blues, postnatal depression and postnatal psychosis Some women are too emotional after childbirth....
Types of Depression

Depression is not a single disorder. Instead it Is a broad spectrum of disorders which have subtle yet...