Compared to the past, most of us probably have at least a slight idea of what depression is about. With its widespread prevalence, it’s not uncommon to come across various instances of people living and suffering with the condition. Dealing with someone with depression is something people should be educated about as there may always come a point in your life where you have to handle or take care of a person who is suffering from the condition. without having an idea of what they are going through, it can be hard to fathom their way of thinking and behaving and it is common for people to lash out and behave inconsiderably as they are unaware of the mental effects associated with a person who has the condition.

Similar to depression, anxiety is another mental disorder that requires a similar level of understanding and patience. While symptoms are virtually opposite to each other, handling a person with these mental disorders should be done in a similar manner. The most fundamental quality to have when dealing with depression is patience. People with the disorder can be perpetually negative which can even drain you psychologically to the extent that you may be inclined to respond in a harsh and negative manner. While this behavior may be justified, it should be prevented as it can have a surprisingly damaging effect on the depressed individual. Depressed people are very fragile mentally where even the slightest blow emotionally can heavily affect the person. 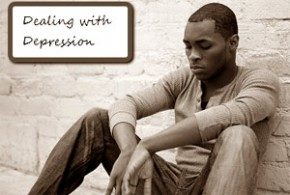 Another aspect to dealing with anxiety and depression is being attentive. Listening to a person with these conditions is one of the best therapies to help them alleviate some of their symptoms and release their mental tension. This will help with both disorders, depression and anxiety. Besides handling the person with care, the most progressive step to make when dealing with depression and anxiety is to seek treatment. As it is a mental disorder, it may appear as though it will wear off with time  but these conditions have a tendency to get worse rather than better. Getting the person to accept the fact and seek treatment is one of the biggest steps to make.

Dealing with depression naturally is always the wiser move rather than resorting to the more common and apparently effective conventional treatment such as antidepressants. There is much debate in recent time regarding the safety of these medications and besides the long term effects of antidepressants, the unpleasant side effects are reason enough to refrain from using them. Dealing with depression can be tough but being able to do it effectively could potentially save a life.

How to Combat Depression

Depression can take down even the strongest people, emotionally and physically. It can seem like a harmless...
Prevent depression

How to Stop Depression Naturally and Without Medication

There are a number of diseases that can get you down and damage your ordinary course of life but mental...
Prevent depression

Depression is a mental disorder that results in numerous undesirable symptoms. There are dozens of symptoms...
Prevent depression

Despite depression progressing to suicidal tendencies and eventually culminating in death, people are still...
Prevent depression

1) Diet We always try to suppress feelings by starving or overeating. Some of us try to do it drinking to...
Prevent depression

How to Deal with Depression by Yourself

Depression can be one of the most versatile disorders to deal with. The symptoms can vary drastically and can...